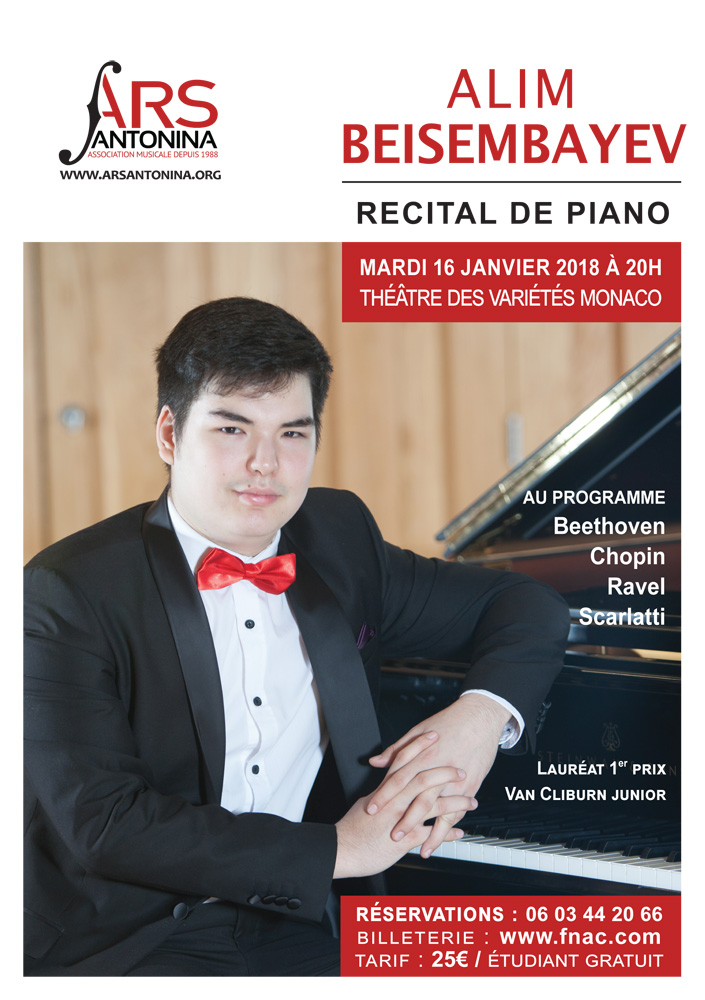 Alim Beisembayev was born in Kazakhstan in 1998. He started playing the piano at the age of 5 in a music school in Almaty. In September 2008, he moved to study at the Central Music School of Moscow. Later that year, he won the televised, international competition for young talented musicians “Nutcracker”.

After two years of studying in Moscow, he moved to continue his studies at the Purcell School for Young Musicians in the UK, where he was taught by Tessa Nicholson.

In 2010, Alim recorded Beethoven’s Piano Concerto No. 1 with the Symphony Orchestra “New Russia” under the baton of Evgeny Bushkov.

His performances have taken place in halls such as the Great Hall of Moscow Conservatoire, Tchaikovsky Concert Hall, the St. Petersburg Philarmonia of Shostakovich, the Steinway Hall, Wigmore Hall Purcell Room, Royal Festival Hall and the Fazioli Hall in Italy.

In February 2016, Alim was a guest at BBC Radio 3’s ‘In Tune’ promoting the concert at the Royal Festival Hall, where he performed Rachmaninov’s Second Piano Concerto with the Purcell School Symphony Orchestra.

In summer 2017, Alim was awarded 1st prize at the Manchester International Piano Comeptition where he performed the First Tchaikovsky Piano Concerto with the Manchester Camerata.

Since September 2016, Alim is currently studying with Tessa Nicholson at the Royal Academy of Music in London with a full scholarship.

Cliquez ici pour avoir un aperçu général du site.
The form you are trying to view does not have Embedded display type.